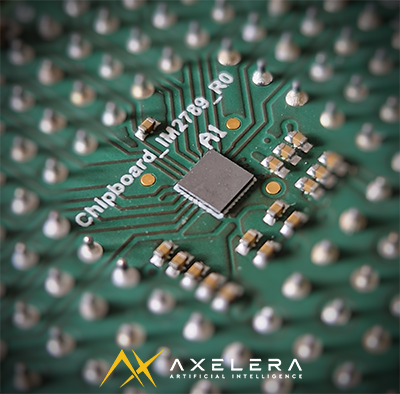 The Thetis Core, first taped out in December 2021 with the support of imec.IC-link, is a test vehicle demonstrating the high performance and efficiency of the in-memory computing technology developed by Axelera AI.

The in-memory computing engine delivers an astonishing 39.3 tera operations per second (TOP/s) with an efficiency of 14.1 TOPs/W at an INT8 precision in less than 9 square millimeters. In the case of high-sparsity activations, the peak energy efficiency reaches 33 TOPs/W. Moreover, by increasing the nominal clock frequency the peak throughput reaches 48.16 TOPs.

Multiple enhanced versions of the in-memory computing engine will be integrated inside the company’s first product, which will be announced later this year and will be available in early 2023.

Axelera AI is a European company which is developing a powerful, efficient, and competitive hardware and software platform to accelerate artificial intelligence workloads at the edge.

Based in the AI Innovation Center of the High Tech Campus in Eindhoven, the company has R&D offices throughout Europe in Leuven (BE) and Zurich (CH) and presence in Germany, Greece, Ireland, Italy, Portugal, and Romania. Since its inception last summer, the company has recruited an elite team of more than 50 senior engineers and developers from world-leading AI companies and research centres, including Intel, Qualcomm, IBM, and imec.

“Thetis Core is an important milestone for Axelera AI. It demonstrates that our in-memory computing technology can deliver extremely high throughput, high precision, and efficiency in an extremely compact footprint,” Axelera AI CEO and co-founder Fabrizio del Maffeo said. “This chip, taped out in just a few months, shows the strength of our fast-growing team which has a unique mix of competencies, from analog and digital in-memory computing to dataflow, RISC-V, machine learning and software.”

“The breakthrough performance of Thetis manifests the efficacy of Axelera’s in-memory computing approach. Such a novel computing paradigm is perfectly timed to meet the stringent operational requirements of the AI applications at the edge,” Axelera AI co-founder and CTO Evangelos Eleftheriou said. “The high-energy efficiency together with the high precision and the versatile software stack will address the user pain points of AI application development at the edge.”

Axelera AI is designing the world’s most efficient and advanced AI solutions. Its game-changing hardware and software platform will concentrate the AI computational power of an entire server into a single chip at a fraction of the power consumption and price of AI hardware today. The Axelera AI software stack will allow customers to run their neural networks and applications efficiently and cost-effectively, without the need to retrain teams on new AI frameworks. Axelera AI cloud and marketplace will also offer off-the-shelf AI solutions for software and hardware developers who need a fast integration of AI in their products.

The company’s groundbreaking solutions will empower thousands of applications of AI at the edge, making the use of AI more efficient and accessible than ever before. Axelera AI’s products will be fully integrated with the leading open-sourced AI frameworks when it is launched to select customers and partners in early 2023. The company is also currently raising its Series A fund, expected to close later this year.

Axelera AI co-founder and CEO Fabrizio del Maffeo will share more details about the Thetis Core chip at imec’s flagship event on nanoelectronics advances & deeptech solutions, the 2022 Future Summit. Details on his fireside conversation, scheduled for May 18, can be found here.

Axelera AI was incubated by the Bitfury group and imec, and started its operation in July 2021. In September 2021 Axelera AI announced its first Euro 10 million investment round led by Bitfury with the participation of Innovation Industries, imec.xpand and in-kind contributions by Bitfury and imec. Since its inception the team of Axelera AI has grown to more than 50 people, expecting to reach 100 people by the end of the year, and with presence in more than 10 European countries.

About Artificial Intelligence at The Edge

More than 125 billion “things” are expected to be connected to the internet (IoT) by 2030 – including smartphones, cameras, smart city sensors, and more. Each of these devices, even the most miniature sensor, creates an enormous amount of data. It is forecast that the total amount of data created, captured, copied, and consumed globally will grow exponentially at least over the next decade. Note that due to a lack of expertise and AI tools, only 2% of the data available today has been analyzed. Artificial intelligence allows us to analyze and understand this data thoroughly. However, the sheer amount of information and the increasingly complex algorithms require a new generation of more powerful, efficient, and accessible computation hardware. Due to growing privacy, security and bandwidth concerns, data is increasingly processed close to its origin, or “the edge.”

The AI hardware available today has been designed primarily for cloud computing operations, a sector with limited cost, power, and scalability constraints. This computational hardware for edge applications needs an entirely new design that considers specific power needs, computational requirements, and economics. Axelera AI will capture this opportunity by developing and delivering a game-changing and scalable technology with superior performance and efficiency to accelerate AI applications at the edge.